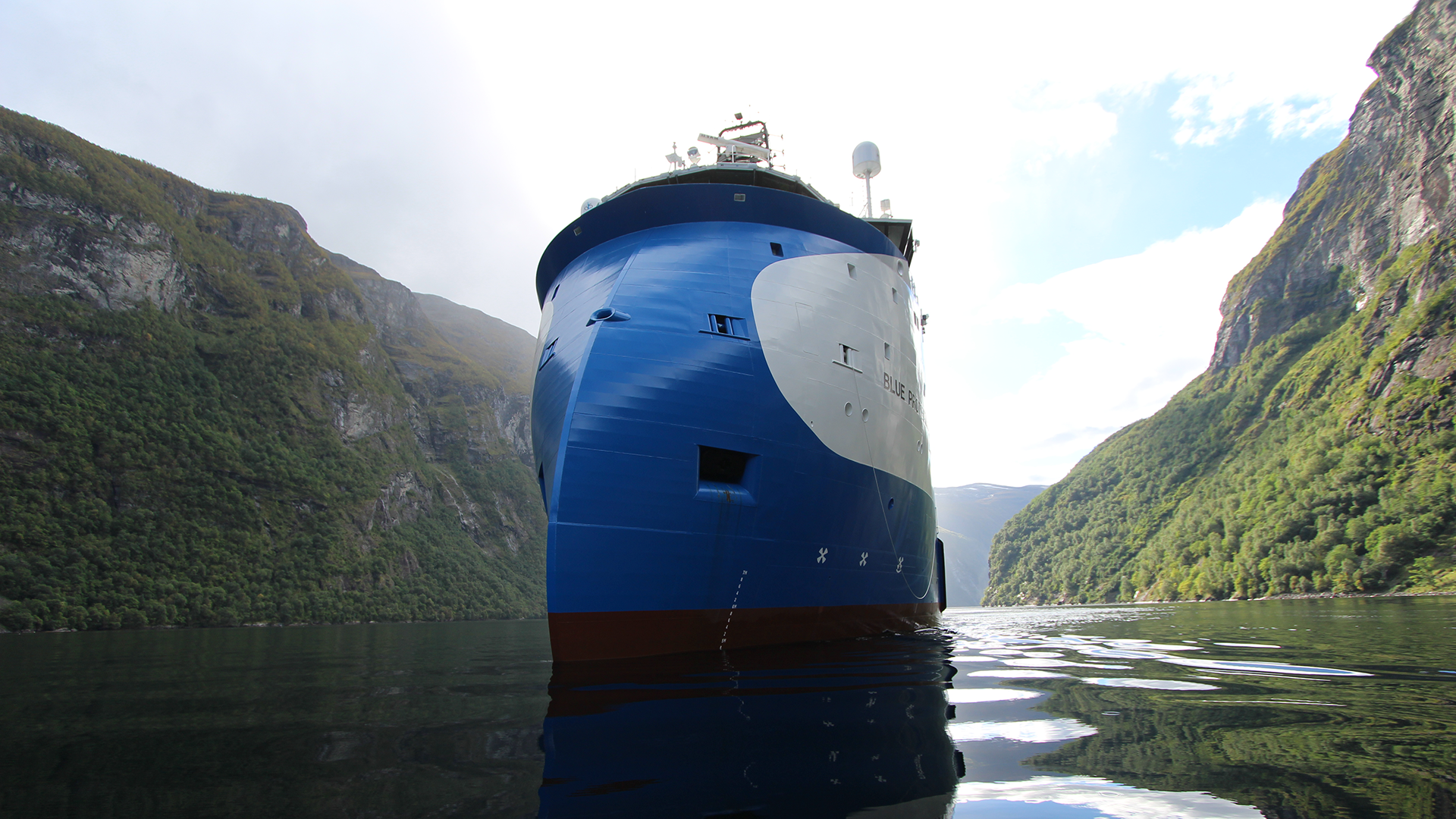 Following Young@Nor-Shipping’s seminar on shipbuilding and design held by Magnus Selås from BW Group, it is time to change the perspective from shipowner to yard. To get insight into the shipbuilding industry and the challenges it has gone through in the recent year in light of the offshore crisis, we needed to move out of Oslo and headed towards to the core of Norway’s maritime strength; the region of Møre. 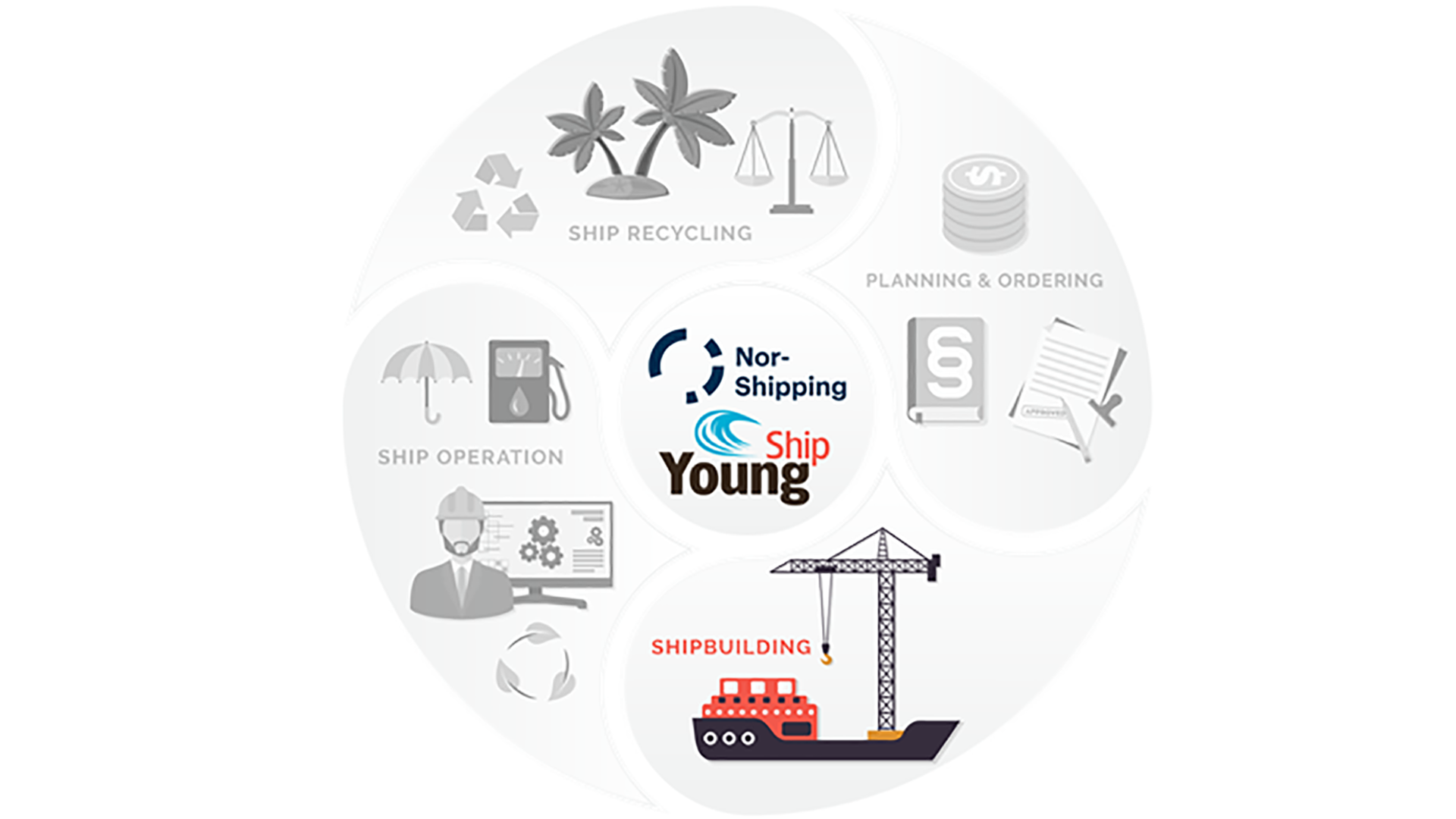 It is quite impressive what this region has achieved, which is the home of over 200 leading maritime companies, and training, research and finance institutions which together form the innovative and dynamic offshore maritime cluster of Møre. We felt it was only appropriate to look for a yard in this area, and a yard we found: One of the very cornerstone companies of Ulsteinvik: Ulstein. 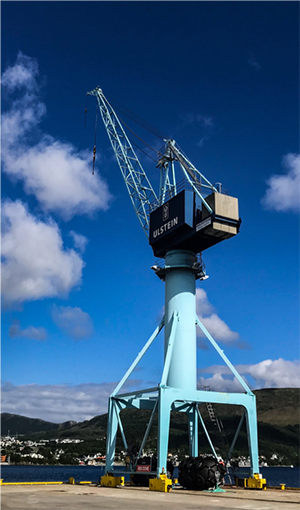 We have all heard the famous phrase “we collaborate when we can and compete when we must”, which describes the maritime cluster of Møre in a very accurate manner; in such small region in terms of population, we can only imagine how the CEO of Ulstein Group, Gunvor Ulstein, will run into competitors in the grocery store on a daily basis. Curious to how it is to build a company in this region, we asked Ulstein how the maritime cluster of Møre has affected it as a company?

– Several companies in each segment of the value chain compete daily with their peers in the cluster, as well as internationally, for every contract. At the same time, the product development process is enhanced by the good communication upstream and downstream resulting in the creation of advanced, more efficient and greener solutions, tailored to the needs of the cluster’s global customers. The cluster dynamics allow the companies to unleash an unparalleled innovation rate and strengthen the cluster’s leading position within the field of advanced marine operations.

In other words, it must be quite inspiring to be part of this cluster, we believe. However, despite being part of a cluster, the company itself must also be able to develop and survive. In this respect, Ulstein has an impressive history. A company which not only is known worldwide for its innovating designs such as the X-BOW® and the X-STERN® design, but also recently has received lots of attention as one of the companies taking a lead in the future of sustainable shipping with the Color Line plug-in hybrid project. Both the X-Stern and the Color Hybrid project have won the Nor-Shipping Next Generation Ship Award. 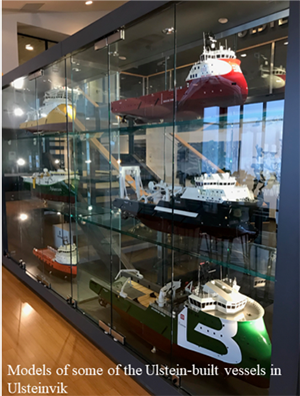 After over 100 years as a shipbuilding company, Ulstein has been there through all the modern development of shipbuilding and design: – Since the beginning one hundred years ago, Ulstein has vigorously sought new opportunities. Already from the start-up, major changes were taking place, significantly impacting the business as traditional sails were being replaced by the modern engine and steel replaced wood. Ferries and fishing boats were built alongside offshore vessels. After 100 years, much has changed in Ulstein, but three constant factors keep defining our business: Innovative products, sustainable growth and global activities. 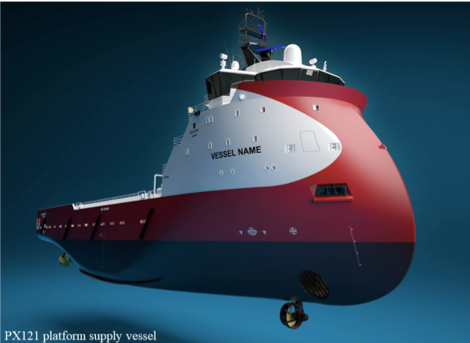 – The most-built vessel is the PX121 platform supply vessel, a medium-sized and highly effective platform which we developed and built at our own yard with our own Ship-owning company to introduce the design to the market. Ten of these have been built at Ulstein Verft, 20 at other yards, which makes a total of 30 in just a few years.

An impressive list, we must admit. Curious as to how all this started, what was the reason for Ulstein entering into the offshore segment?

– When oil was found on the Norwegian shelf on 23rd December 1969, everything changed. Ulstein quickly noted that the first offshore vessels entering into work outside Norway, were not suited for the rough conditions there. Ulstein therefore developed the UT700 series, which had higher freeboard and other design elements to increase the safety at sea.

– The X-BOW® introduced a gentler way of displacing water; a tapered fore ship shape with a different volume distribution as well as sectional angles, resulting in a wave piercing effect at small wave heights, and also reducing pitching and bow impact loads in bigger seas. When comparing fore ship volumes with more conventional flared bow shapes, the X-BOW® has more volume upwards from the waterline. Due to the different distribution of volume the vessel will not be exposed to the heavy slamming forces observed on vessels with flared bows in waves. This makes the motions more gentle, increasing crew comfort and their efficiency whilst also conserving energy by not decelerating as much. Additionally, an X-BOW is less sensitive to changes in the vessel’s draught and speed, which is an advantage for vessels which have large variations in draught over the course of their operational profile, whereas a conventional bulbous bow is typically optimised for a specific loading condition and speed.

– The X-STERN® is derived from the X-BOW® to achieve the same benefits for the aft ship. The sloping, higher stern allows for a sharp stern shape in which the traditional flat transom plate is replaced by a tapered stern shape.

What is the success and the story behind the X-BOW® design? – The bow concept was launched in 2005, together with the first shipbuilding contract, and gained immediate interest from shipowners. The X-BOW not only ranks as one of the most visual representations of forward thinking in ship design, but also as one of the most functional. The X-BOW has since been used on a variety of vessels, after initially proving the concept on Offshore Services Vessels. It is currently also seen on cruise vessels for arctic areas, maintenance vessel for offshore wind and other powerful workhorses such as fishing trawlers and ultralong-distance towing vessels that have to endure rugged conditions while still performing exact and precise work. 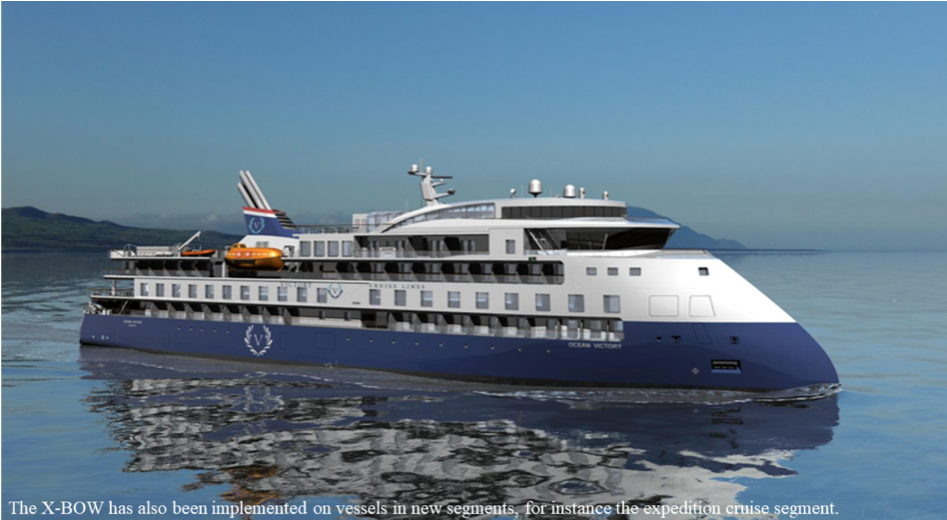 As a side-comment, we most point out that as a true innovator, perhaps influenced by the maritime cluster in Møre, Ulstein decided to make the X-BOW® design available for the public instead of keeping it exclusive for shipbuilding project at Ulstein yard, i.e. in addition to prototype shipbuilding at Ulstein’s own yard, Ulstein sells designs, equipment packages and site follow-up services to yards around the world, including the X-BOW® design. In this way, other yards are also Ulstein customers, and they buy design and equipment packages from Ulstein.

The offshore crisis and new segments
After so many thriving years in the offshore industry, the offshore crisis hit the market hard in 2014. How the offshore crisis affected Ulstein and how it managed to survive by looking into new segments, are subject many are interesting to hear more about. Starting from the beginning, how did the crisis affect Ulstein? – We experienced 2-3 years with low activity in newbuilding orders within our core segments. In this period, we were more engaged in conversions, services and ship repairs than newbuilding projects. We had to let several of our workers go. Since then, we have entered into new segments, the activity is high, and we have employed new and previous workers.

How did Ulstein manage to survive? – We had a good order situation before the crisis and adjusted our course underway. 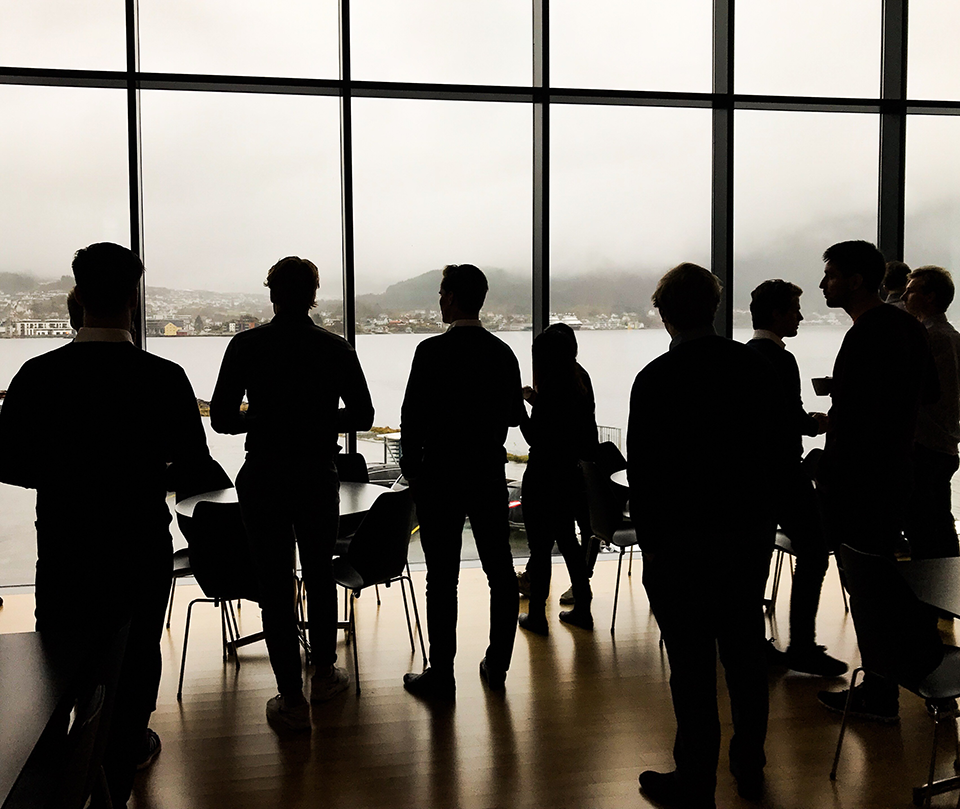 Looking back, is there anything Ulstein would have done different? – Retrospectively, we could have started earlier with designing vessels for other segments. On the other hand, since we were focusing on another area in the offshore sector, namely offshore renewables, that influenced us in coming forward with the X-STERN solution, which has already become a success. The X-BOW was also developed in a period of crisis for the maritime businesses. Tough times stimulate creativity.

What other segments is Ulstein looking into now as a result of the offshore market still being slow?

– Several; We have already been contracted for vessels and designs in segments such as offshore renewables, where there is demand for rock installation, cable laying, heavy lift and other vessels. Additionally, we have sold vessels or designs for a yacht, exploration cruise vessels, RoPax vessels and Fishing Vessels to name a few.

When entering a new segment, there is a lot to consider. How does Ulstein decide which new segments to enter? – First of all, we have to believe that we can add value through our expertise, and that there is sufficient demand. For this we do several analyses to assess if we can achieve a competitive position in that segment.

Do you believe the offshore market will return to what it was before the crisis? And if so, when do you believe this will happen? – This will depend on many factors, and it is hard to predict how this will evolve. We do believe we will see a rise in offshore oil & gas activity from today’s levels, but perhaps not a return to the same level as witnessed up until 2014. But regardless of what happens with Oil and Gas, there are other segments that need innovative solutions, also in offshore, and Ulstein wants to be at the forefront of the developments for marine operations.

Sustainability in shipbuilding
Talking of which, innovative solutions, specially combined with sustainability, is a hot topic these days. What measures can a yard take with regards to ship design to make the shipping industry more sustainable?

– The yard can take various actions such as to get certified within ISO standards, e.g. the 9001 and 14001, can deliver annual sustainability reports such as to the UN Global Compact, can carry out training for yard workers. To enhance the sustainability in a vessel’s operation we can, by integrating our knowledge of both ship design and shipbuilding, work closely together to guide the owner to find the right technical solutions also with regards to sustainability. 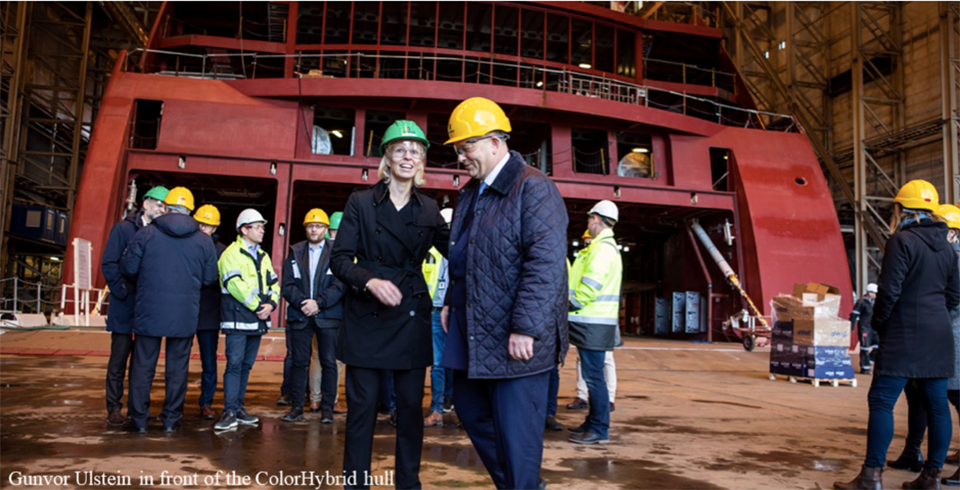 Currently, the “Color Hybrid”, Color Line’s next flag ship is being finalized at Ulstein Verft. The ship is scheduled for delivery in the second quarter of 2019. Recently, Ulstein shared a picture of Gunvor Ulstein in front of the hull which had just arrived to Ulstein, marking the kick off to the construction of the ship.

Can you elaborate a bit about this project, what makes it so special? – The vessel takes into use new solutions to reduce noise and emissions. The ship will be a plug-in hybrid, in which the batteries are recharged via a power cable with green electricity from shore facilities or, as a secondary alternative, recharged on board by the ship’s generators. The ship will have full battery power into and out of the fjord to Sandefjord inner harbour. There will therefore not be any emissions in this area, dramatically increasing the air quality in the local environment.

It is for sure very exciting and we look forward to following the construction of this vessel during the next months.

Stay tuned for more insight into a ship’s life cycle as Young@Nor-Shipping moves on to phase three: ship in operation.

In need for a recap of Young@Nor-Shipping’s concept? Please visit this link.

Did you miss out on phase 1? For insight into financing a new build, Young@Nor-Shipping has earlier written about the perspectives from an investment banker.