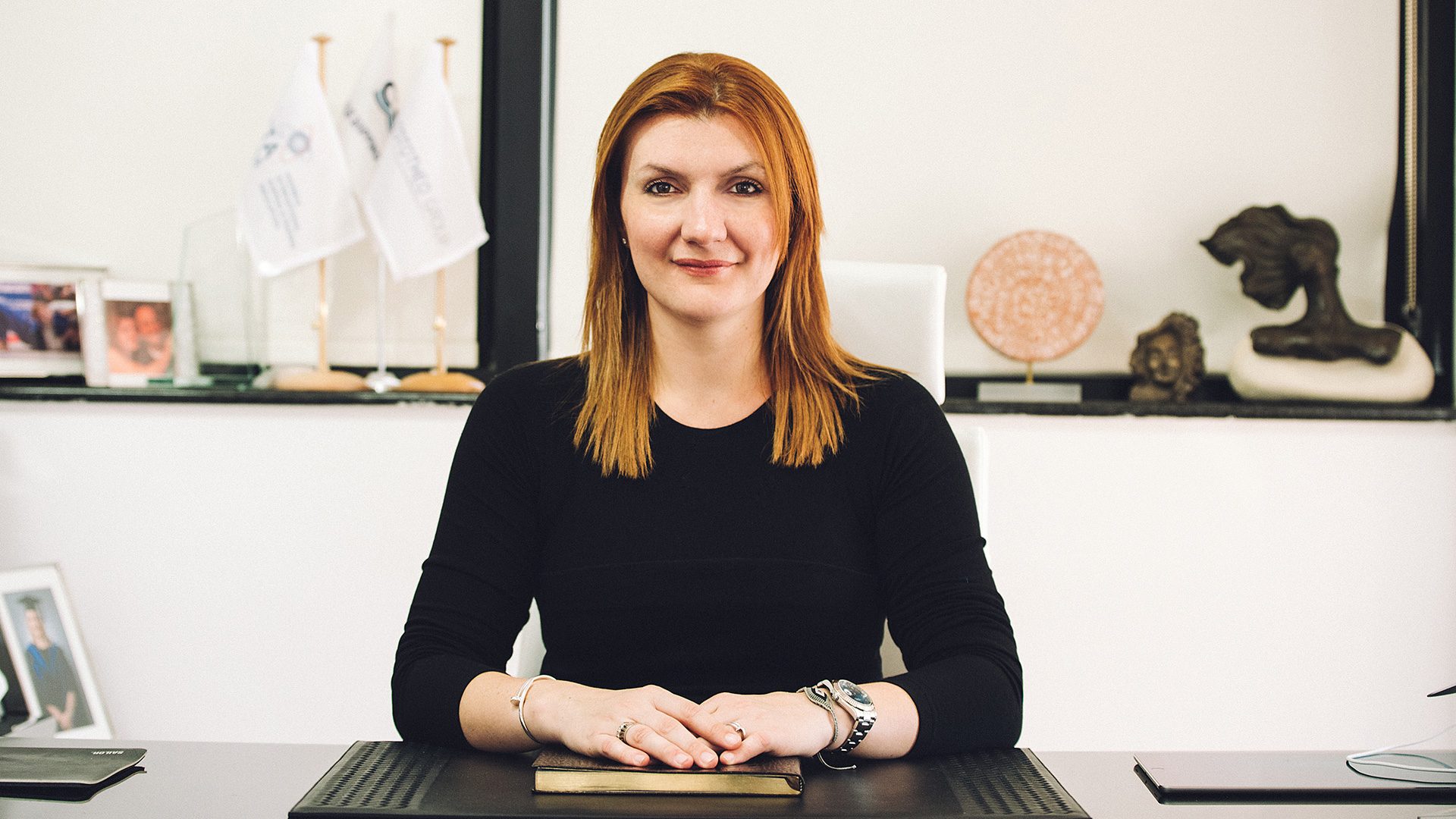 Share on facebook
Share on twitter
Share on linkedin
It’s good to talk, but it’s time to act, states Despina Panayiotou Theodosiou, CEO of Tototheo Maritime and President of WISTA International. In this interview she gives her opinon on why a changing world, with changing technology, demands a changing maritime workforce.

Despina Panayiotou Theodosiou, CEO of TOTOTHEO MARITIME and President of WISTA International, argues that a changing world, with changing technology, demands a changing maritime workforce. Companies overlooking key groups of talent – based on gender, culture or ethnicity – will fail to evolve and adapt to the new reality. And that, she says, means just one thing.

“Shipping is changing, but is it changing quickly enough?”
Despina Panayiotou Theodosiou is responding to a question with a question. When asked about the traditional, some would say (deeply) conservative, nature of the industry, she states her belief that a transformation is underway. But, shipping, like its largest ships, is taking its time to turn around.

“In a modern, well-functioning society diversity is an accepted norm,” she stresses. “People of different genders, ages, beliefs and cultures mix, giving broad perspectives and enriching understanding. Everybody benefits from that. In shipping, although the numbers are very old, we know that only around 2% of seafarers are women, with no clear idea of how gender plays out in land-based and support roles and sectors. So, it is definitely not the ‘norm’ to be a female in shipping in 2019.

“And we at WISTA, alongside a growing number of supporters and industry players, want to normalize that.”
Fail in that, Theodosiou adds, and the consequences will be grave.

“In short,” she says, pausing slightly to impress her point, “the future of our industry depends on it.”

Setting the agenda
The CEO of TOTOTHEO MARITIME, a leading global supplier of advanced maritime technology and services, is speaking after being elected to a second two-year term as WISTA International President. Despite her hectic business schedule – which has seen her spend 25 of the last 30 days away from her office at the group’s Cypriot HQ (this chat is split across visits to the US and Cayman Islands) – she is keen to make time for a conversation that, she says, must be emulated worldwide.

“Diversity has to be pushed higher up the agenda,” Theodosiou opines, “and, thankfully, that is beginning to happen.”

This year’s IMO World Maritime Day, centred on the theme of ‘Empowering Women in the Maritime Community’, shows that the issue is moving out of the shadows, while, privately, WISTA is engaging in increasingly frequent conversations with individual businesses.

“I think a growing number of companies realise the benefits of initiating their own corporate diversity programmes. Some major names are already emerging as role models in this respect – such as Maersk and IMMARSAT – but more often than not they simply don’t know where to start,” she explains. “That’s when I’d encourage them to get in touch with the WISTA team to see how to address the issue. We can then work side-by-side to try and tailor solutions that deliver real benefits.

Encouraging understanding
As an example of how WISTA enables tangible action, Theodosiou refers to a project with Anglo Eastern Ship Management and ISWAN. Anglo Eastern initially contacted WISTA with the idea of creating a booklet based around building and maintaining gender diversity onboard merchant fleet vessels. Working in collaboration the two produced a 24-page publication, tackling both the issues faced by female seafarers and encouraging greater acceptance and understanding of them amongst male colleagues. This proved to be so successful ISWAN decided to make it available industry-wide through a free download (available here).

“By promoting understanding we enable inclusion,” the WISTA President comments, stressing: “And this industry needs to ensure it is open to everyone.”

Addressing demand
It certainly does.
According to the International Chamber of Shipping the demand for seafarers is currently around 1.55million individuals, with demand for officers up by 24%. That translates to a current shortfall of approximately 16,500 officers. Given the growth projections for the industry over the next ten years that gap will undoubtedly loom larger – so new talent is sorely needed.

“We need to grow the human capacity within the industry,” says Theodosiou, “and that means encouraging and enabling more women to go to maritime academies, more employers to accept them as candidates, and more individuals (and the parents of young women) to see this as a valid, promising career option.

“The more used society gets to seeing women at sea the more likely they will be to choose that path – it becomes the norm.”

But of course, there’s more to maritime, especially now in the digital age, than simply being ‘crew’. And this, according to Theodosiou, is where women can potentially benefit most – and deliver the most benefits.

Evolving opportunity
“Digitalisation has transformed the industry and opened up a wealth of new opportunity,” she explains. “Suddenly we have new positions, new functions and new openings for people that may not have traditional maritime education or experience. If shipping wants to prosper it has to cast its net wide to get the best people, regardless of gender, age or ethnicity. That will accelerate positive labour force developments.”

The WISTA International chief believes growing environmental awareness, pressure and regulation will also work as a catalyst for change.
“Again, the need to comply and improve environmental performance means different skillsets are not only welcomed, they’re essential,” she notes.

“It’s no longer business as usual, we have to foster workplaces where innovative ideas and new strategic directions are taken into account – and that means moving away from established ‘groupthink’ and encouraging new voices and open-mindedness. Diversity is central to that. We have to engage.”

Platform for action
WISTA itself uses Norway’s Nor-Shipping as a key industry engagement platform. The organisation runs a series of activity at ‘Your Arena for Ocean Solutions’, with its Waves of Change conference at the main exhibition halls in Lillestrøm as a centrepiece, complemented by further speaking engagements and involvement in Oslo-based events.

It’s a partnership that, according to Theodosiou, pays dividends.
“It’s about creating awareness in an environment that’s not only relevant, but also open to change,” she states. “That’s what we’re doing now with this conversation, speaking to you the reader, but it’s also important to do that face-to-face at key industry gathering points.”
Nor-Shipping, with its 50,000 international delegates, provides the ideal opportunity.

“It’s not only the number of people that attend, but also the ‘character’ of the event week that makes it such a good fit,” she explains. “Nor-Shipping has a focus on innovation, future strategies and collaboration – it is a manifestation of the open-minded approach that we need in shipping. So, we know the delegates listen, we know they want to learn and, with the level of executives in attendance, we know they have the power to act. We feel it was a great success in 2019 and are looking forward to seeing what’s in store in 2021.”

Mapping the industry
By the time Nor-Shipping 2021 rolls around what does Theodosiou hope to achieve (other than breaking the world record for collecting Air Miles)?

Well, apart from more diversity conversations, ongoing campaigns and collaborations – with everyone from the IMO to individual companies and executives – she also wants to address the ‘numbers’.
“It’s difficult to affect real change if you don’t have the right information about where you’re starting from,” she says, referring to the aforementioned 2% figure, which originally comes from a survey conducted in the 1990s. “Although we don’t think the proportion of women crew has changed dramatically over that period the maritime industry certainly has, with new segments, disciplines, roles and technology. So, we need to map that first and then address the numbers. That will give us a clear picture of where we are, and how far we have to travel to get to where we want to be.

“WISTA, in collaboration with the IMO, has now started that surveying process. We hope to have some initial numbers within the course of the next year.”

Open for business
Theodosiou finishes by stressing that diversity is about more than gender – it’s about universal inclusion.
“Our message is that there’s a place in maritime for everyone,” she smiles. “Young, old, man, woman, regardless of belief, skin colour, or any other personal characteristic, culture or lifestyle choice. To secure the future of the industry – commercially, socially and environmentally – we have to be open to new people, new influences and new ideas. We have to be open to change.

“Sometimes that change might take a long time to achieve,” Theodosiou concludes, “but long-lasting change often does. The important thing is that once we set a new course, we commit to it!”
The big industry ‘ship’ is turning it seems.

Expect to see more women at the helm.